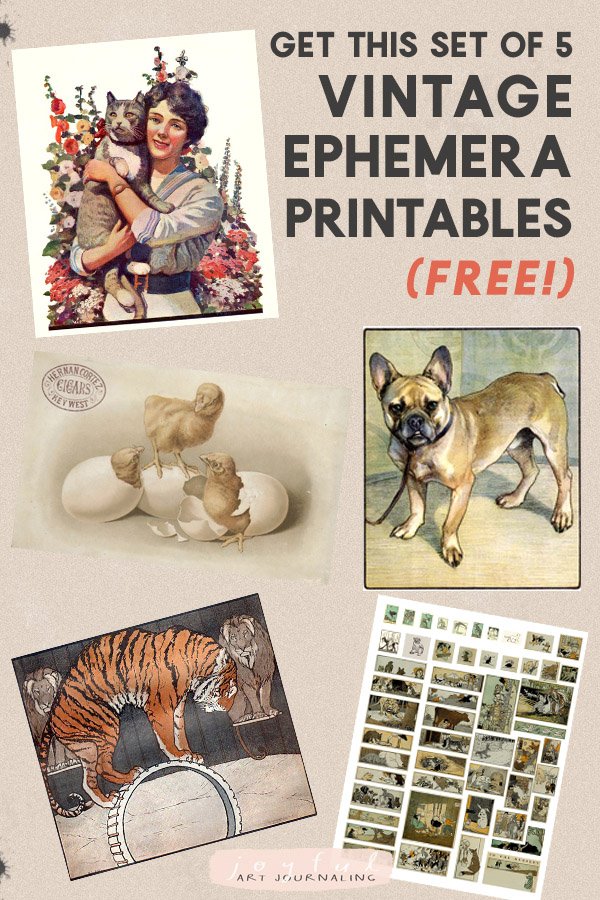 I love using animals in my art journals. One reason for that is because they’re cool as symbols for other things (for instance, tigers are a symbol of power and energy, horses represent drive, passion, and a need for freedom, etc.)

I personally also love to collage two (or more) different animals together to make new ones (I got that from an old art school assignment). It’s also so fun to anthropomorphize them by putting them in tiny clothes, adding hats, giving them jobs, etc.

So I printed out three from this mini collection of five free vintage animal ephemera for your art journal — a French Bulldog (I believe), a Tiger, and the “minis” page with a ton of small images: 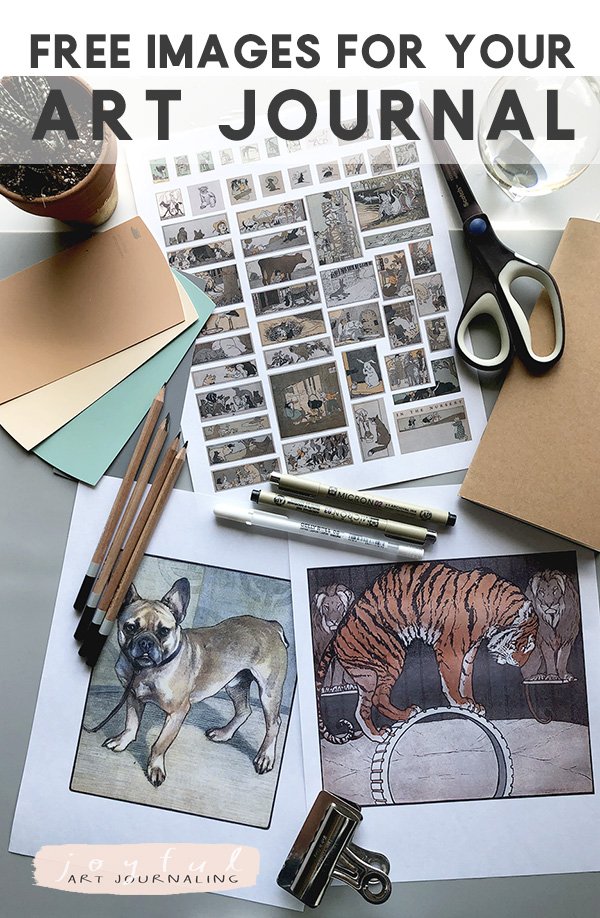 Psst.... just want the PRINTABLE FREE VINTAGE ANIMAL EPHEMERA FOR YOUR ART JOURNAL? Sign up below:

How I used the images…

I had some vague ideas how I wanted to use the images I chose. So I went ahead and cut them in the way I figured I would use them, and I kept some of the “extra” paper for a couple of reasons…

First, I like to use the backgrounds in different ways in order to create some continuity within a page. Plus I like to have different textures to use in other spreads. And finally, let’s just admit it now: I’m a bit of a paper hoarder! I try to use everything up that I can. 😉 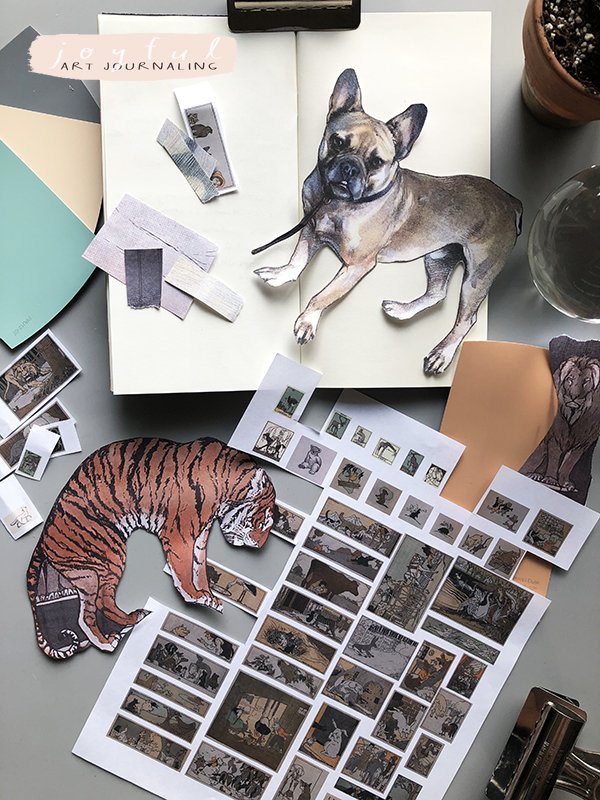 Once I have them all fussy cut and ready to go, I decided to use that cute dog first, because an idea immediately came to mind. Just like my real-life rescue dog, Sam, this guy just has the look of a dog who rules his house (with a sweet and loyal paw, of course!)

I put him in what is probably now my favorite sketchbook for art journaling.  I combined the doggy with a vintage book page, a “crown” cut from a magazine, watercolor, and Sharpie oil-based paint pen. I added some “shadows” under his feet, because before I did that he kind of just looked like he was floating on the page. And I wrote “the BOSS” on a scrap of what was part of his original background.

So this is how his art journal page turned out: 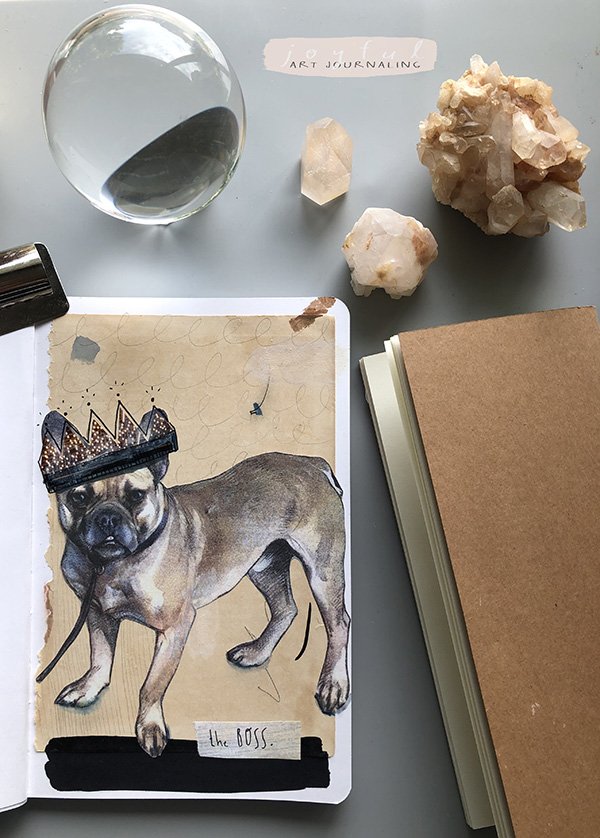 Next up I used some of the mini images. I have one journal where I write down answers to journal prompts. Sometimes I fill an entire page with my written answers, but in this case it was just 3 lines.

(I also used washi tape, part of the boss’s original background, a botanical sticker, a Paperang sticker print of my hydrangea that I colored in with colored pencils, some torn paint samples, and micron pen. You can see the complete supplies list at the end of this post.) 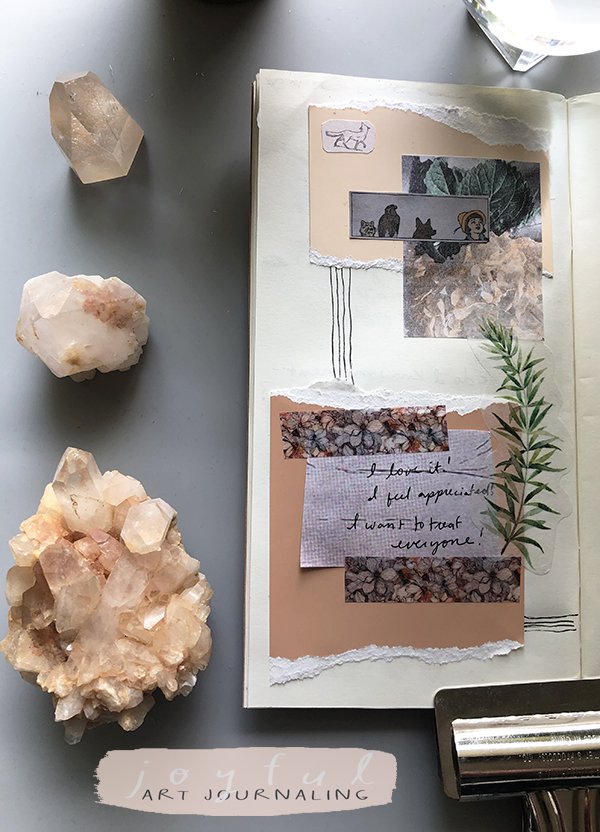 The tiger was a bit trickier. I had this idea that he’d be standing on a planet or moon or something (originally he was standing on a round circus ring), but I couldn’t find anything that fit just right.

So I started looking for alternate (but still round) ideas. Still, I came up with nothing. That is, until I started thinking about his orange and black coat, which reminded me of the 1960’s-70’s and that reminded me that my mom gave me a book about indoor plants from that era, so I started to look through it.

Before I cut anything out, I would place him here or there… it wasn’t until I found this funky living room scene that I imagined him climbing on the sofa (like cats like to do!) but sort of hiding behind the plant, too. It just worked out perfectly (purrfectly?) that it looks like he’s looking at the apple on the table!

Instead of putting this one into a journal, I actually put it in an altered book I’ve been working on for awhile now: 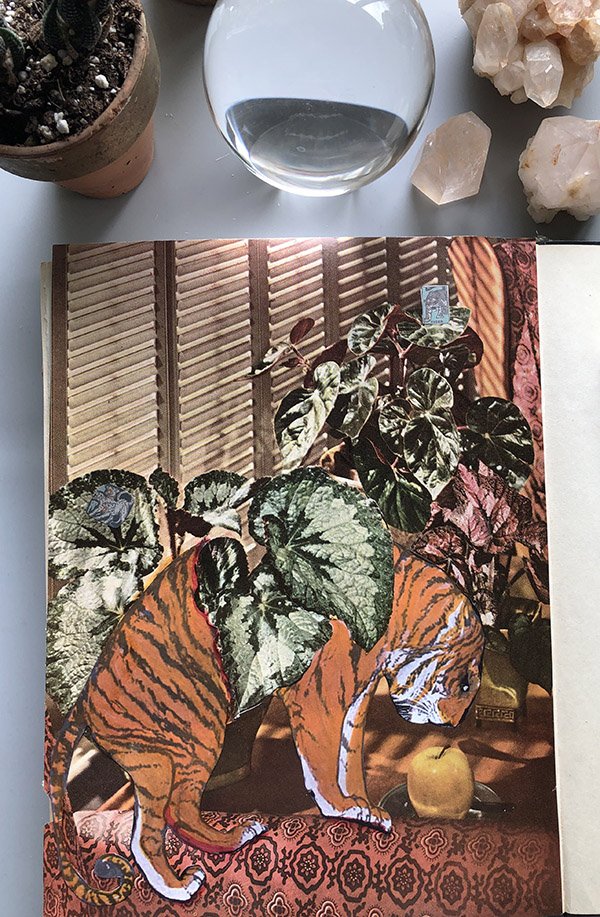 So there you have it! Three ways to use five images from this FREE mini collection!

You can get yours simply by signing up for my free email newsletter! And when you use them in your own art journals, be sure to use the hashtag #joyfulartjournaling on Instagram so I can check them out.

What I Used in these Art Journal Spreads: 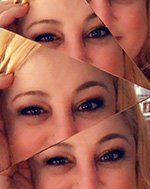